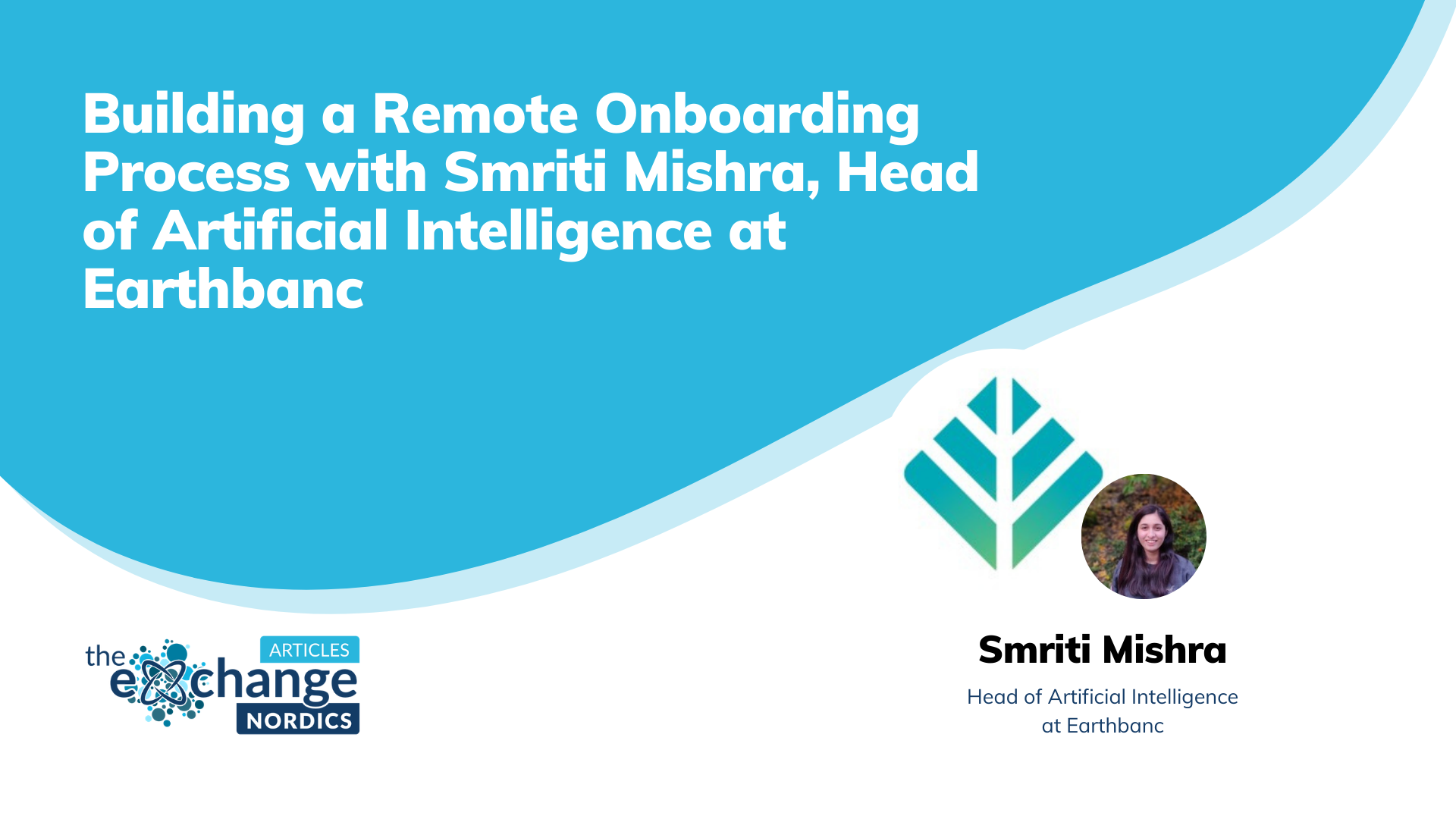 For many, onboarding is one of the most important parts of the employee experience and has direct ties to whether talent decides to commit to a position long term.

In fact, the lack of effective onboarding is a major reason why companies lose 17% of their new hires within the first three months and why 20% of all staff turnover occurs within 45 days of employment.

And if you’re in the tech space, onboarding is even more important when you consider all the technical aspects like coding standards, peer mentorship and access to high-end machines that are normally handled without a second thought in an office setting.

We wanted to reach out to a leader within the Nordics tech space who isn’t just working on the perfection of a remote onboarding process but has also recently been through one herself.

Smriti Mishra is the Head of Artificial Intelligence at Earthbanc -the world’s first green digital bank with a high yield earth finance account that finances carbon sequestration and ecosystem regeneration.

Having joined the company 7 months ago, Smriti has been working within a team of 5 towards the deployment of AI and machine learning solutions during the COVID-19 pandemic. With the company a predominantly remote company, Smriti was introduction to her colleagues was straightforward with Earthbanc having the infrastructure in place to support new hires all around the world.

Do Remote Hires Miss out on Anything During Onboarding?

A seamless and welcoming remote onboarding experience is a sure-fire way of engaging new remote employees from the off. But for organisations set up for face-to-face inductions and introductions—like us!—this year, remote onboarding has certainly been a challenging adjustment.

For Smriti, who has experienced both a face-to-face and remote onboarding period, there were a few differences.

Working remotely, we lose the ability to ask a niggling question, do a quick demonstration, or even just observe team behaviours—so it’s likely that new employees will take a bit longer to get up to speed during the remote onboarding process.

“Naturally, you have a million questions. If you don’t have really good transparency and good, clear guidelines or channels of communication, it would be a struggle.”

Likewise, you also miss out on all those little conversations that naturally occur and help you form bonds. For Smriti, this was especially obvious when it came to lunchtime.

“I really believe food is a great way to bond with people. You can learn so much about someone over a meal at lunchtime. I miss that.”

For all the little things that new candidates might miss, remote working unlocks a world of freedom for new hires. As long as communication is clear and the new candidate is provided with everything they need to hit the ground running and get a win under their belt as quickly as possible.

Tips for Onboarding a Remote Candidate

No two onboarding processes will look the same. The amount of variables that shift between companies and industries means it’s always difficult to share tips and advice. Below we’ve outlined a few general tips for onboarding a remote candidate in a technical discipline.

A big concern when joining any new role or team is that you won’t be able to balance your onboarding and development with the delivery of immediate impact.

As an employer, you should be helping in this regard by making as easy as possible for a new developer or engineer to ship something within their first week.

It could be a tiny product improvement, or a fix to a bug or a typo—anything. But it has to get out to production.

This practice is part of a commitment to continuous deployment and is inspired by other companies who have done the same. The rule serves multiple purposes:

Demonstrates the entire lifecycle of a change to the software, from idea to launch.

Provides confidence to the new hire around putting code in front of users. The worst that happens is something actually breaks, the code is quickly reverted, and everything’s okay again.

Re-enforces the culture of continuous deployment within the organization, which has many of its own benefits.

Here’s what Chief Technology Officer at OneEleven; former Vice President of Engineering at Top Hat had to say about their onboarding process:

“We always paired new hires with an existing developer and had them do some real work on the first day. The most typical first-day onboarding project was to fix a bug, create a unit test, deploy it to a test environment, test it, and have it ready for the next deployment to production. If getting that done is a tall order for new hires, you should look carefully at your systems and tools to see if you should be investing there.”

This is team-work 101 but is especially important if you’re working in a niche of agile that a new developer might not be used to.

The first bit of software your new software developer should be logging in to is Slack.

As far as how often a team leader or CTO should be checking in on their new developers in a Fibonacci-like sequence. This means checking in on them on Day 1, Day 2, Day 3, Day 5, Day 8, etc until they’re fully onboarded. A check in doesn’t take a long time, this is about giving them the space to learn and develop while also making sure you’re around to highlight any concerns.

Set a Them Up With a Buddy

Everyone feels awkward asking a lot of questions when they’re new, especially if they’re now online with someone they may not have met!

After you’ve introduced the new hire to the team, send a separate introduction between them and a single member teammate who will be acting as their buddy while they get ramped up. Give the new hire free rein to ask as many questions as they’d like, no matter how silly they may seem.

Removing the hesitation someone may have about bugging someone too much (especially when they can’t see if they’re physically annoyed) means that they’ll get through any snags in their onboarding checklist in no time.

For Smriti, this is key to ensuring that people stay engaged and committed. Matching your new candidate up with someone who shares the same mentality can be key.

“Be very clear on what’s expected and what the company is about because I think one of the biggest reasons why people leave a company is because their mentality doesn’t match with the company.”

Google’s Codelabs is a well-known version of documenting your code standards and tutorials. The website provides a hands-on coding experience/tutorial. Most similar tutorials will step you through the process of building a small application or adding a new feature to an existing application. They explain why a core abstraction was designed, show how it’s used, walks through relevant parts of the codebase, and then provide a set of exercises for validating understanding.

Make it Clear Who Owns What

For a lack of a better term, it’s important to keep a document of the important stakeholders of each project or duty. When looking at various pieces of code, new developers will want to know who they should talk to regarding it. This lets the new employee be aware of the procedures in accomplishing various tasks, especially when decision-making is up to a manager, and when they can use their discretion in deciding.