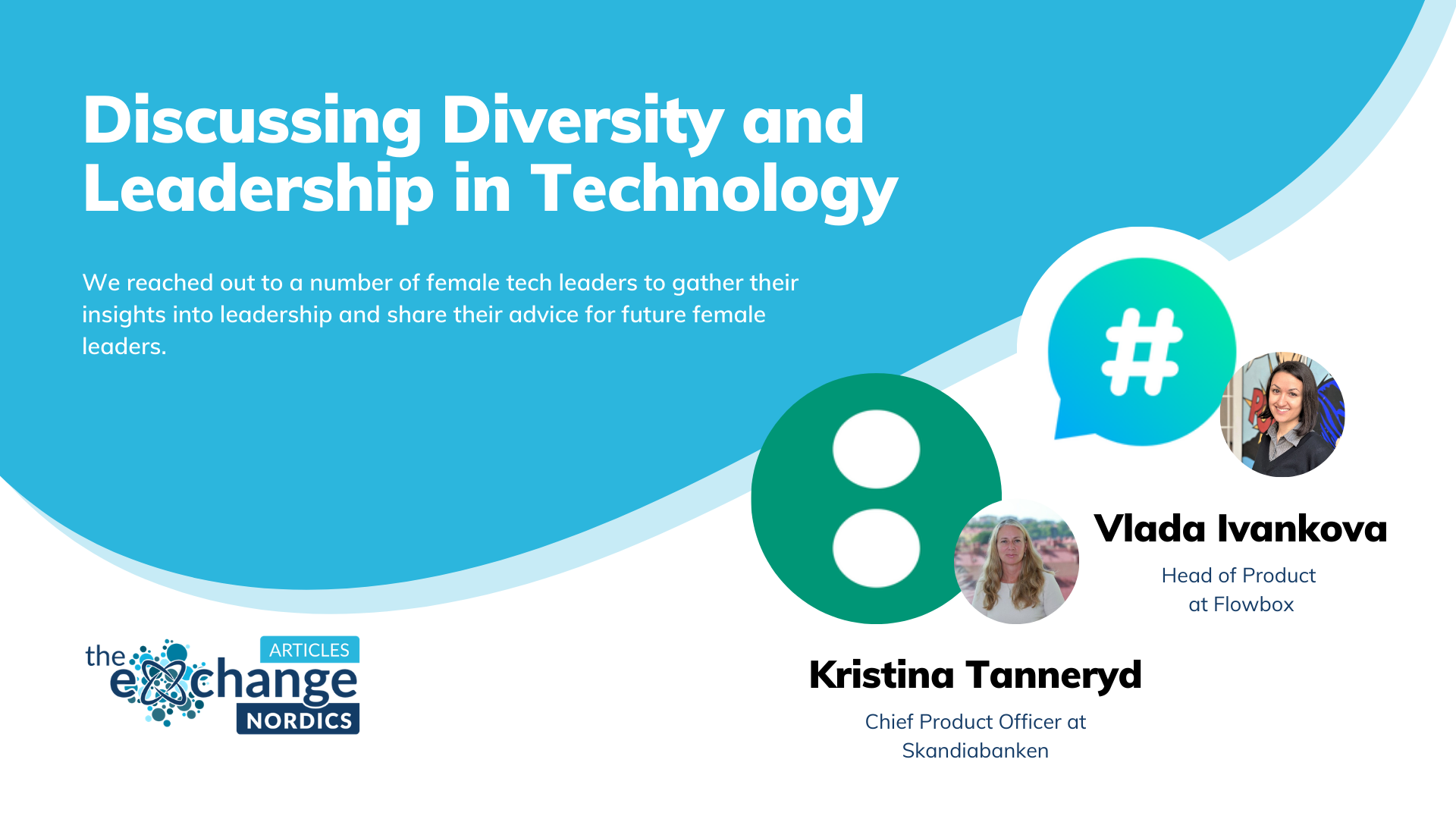 We reached out to a number of female tech leaders to gather their insights into leadership and share their advice for future female leaders.

Starting her career in 1990, Kristina worked at the Swedish Credit Information Bureau UC. This first role laid the foundation for a long and successful career in the Finance Sector for Kristina – a sector that relies heavily on technological investment to stay agile.

In her 30 year long finance career, Kristina has worked in a number of different companies and has seen the industry evolve and transform from being largely reliant on branches to automated transfers and processes in a near seamless and contactless format.

Building A Career on Curiosity

For Kristina, her long tenure in Finance is due to her ability to ask questions.

“For 30 years, I’ve been asking questions. How does it work? Why do we do it? This is how I learn. Being curious is how i’ve built my career.”

For many, asking too many questions can be a sign of weakness or lack of knowledge. But the power of asking questions, of being curious and getting to the root of a problem is a powerful tool indeed and it’s one that Kristina holds at the core of her working methodology.

Kristina’s curiosity has created a culture of innovation wherever she’s been and has enabled her to work in both local financial institutions and large international groups. Now at Skandiabanken, Kristina reports to the CEO as Chief Product Officer. For the past three years, Kristina has  engaged heavily in the mortgage product area and the digital transformation enabling a  growing  market share for Skandiabanken.

We were keen to speak to Kristina about her leadership style and what advice she has for future leaders in technology.

A core doctrine of Kristina’s leadership style is having a holistic view on projects and the business as a whole.

“I tend to try to lift myself up and look at the bigger picture.”

Having worked in organisations that necessitated a broad spectrum of knowledge in different areas as opposed to being specialists in one area, Kristina has built up an innate ‘helicopter view’ of projects and the business that allows her to work with agility and, importantly, to bring everyone involved  on the journey with her.

This holistic view allows Kristina to point her team in the right direction and remove roadblocks from their path before they become a problem.

We Need to Show What Can Be Done

The Financial Sector and technology have both traditionally been seen as a man’s world. For Kristina, who has spent 30 years in the Finance Sector in Sweden, her legacy is one that she hopes will inspire others to see the art of the possible.

“We need to be at the forefront to show that it can be done. The first thing I would say to any woman that can take a position in tech, is to do it. We have to be that signal that lights up the way for other women and tells them not to back down.”

Demonstrating resilience and drive across her career, Kristina has worked in highly technical environments that are, more often than not, linked to high risk scenarios.

Being resilient, in theory, seems sound – but applying it is another story altogether. Elements of doubt begin to creep in as you climb the career ladder. This doubt is commonly known as Imposter Syndrome and it’s something that adversely affects women.

When Kristina is battling through these feelings, she’s thinking about the thousands of women out there who maybe don’t have access to the same opportunities she has.

“Don’t think you can’t do it. Don’t think it’s not for me. Don’t think you don’t have the knowledge. Take the position because we need it, we as women, worldwide, we need it. We need to be in the forefront and not to miss out the opportunity to make a mark. So be brave because you can learn and grow.”

Don’t Be Afraid To Talk About Your Achievements

For many women, confidence is hard to come by.

However, despite the great strides that have been made for gender equality and the increased focus on female entrepreneurs and executives, the ever-widening gender gap in our culture is still very real.

A LinkedIn study showed women are far less braggy about their successes than men. Their profiles are shorter, and “even when they had similar jobs and skill levels, women would still include 11% less of their skills than men on their profiles.

This is a sentiment that Kristina echoes.

“We don’t talk about our achievements nearly as much as we should. Maybe it doesn’t come naturally?”

Overcoming this and being open about your achievements isn’t something that can happen overnight. For Kristina, it starts by being honest with yourself and your friends before you can transfer it to a boardroom.

“Gather five of your best friends and have a mock up interview,  where you explain to them what you can do. Go through your achievements. Go through how much mandate you have had, how much sort of responsibility you’ve had and what you have managed to deliver. Get comfortable saying it.”

Kristina recommends working on this and understanding what you should be emphasising.

“This is something we should be training, because it’s a skill we all need.”

Starting her career in her native Russia, Vladislava started working in Product Positions in 2012 after moving from the sales team to the development team of the company she was working for.

“I was running between stakeholders and the developers operating as a middle man. Then I found it was something I could get paid for!”

From there, Vladislava got her first role in an IT company. The first steps are often the hardest and, for Vladislava, it was an incredibly formulative step for her career.

“I found myself acting as a Product Owner, which was initially not easy to grasp. My team placed a lot of trust in me and supported me in my new role, sharing their technical  knowledge, helping me understand software development processes and navigate complex organizations. I feel lucky to have received this field training.

Working for a few American owned companies in Russia, Vladislava was exposed to a different kind of working culture and a strong international mix. In 2014, Vladislava realised that she needed to move away from Russia to progress her career.

With a love for Scandinavian equal culture and environment-focused policies, Vladislava moved to Stockholm and felt at home. It wasn’t long before she started work at Flowbox and she hasn’t looked back.

“I love this very flat hierarchy that we have in Sweden. It’s actually welcome to speak up and bring up concerns and ask questions. And it’s something that is super important for me. Because I can never hold my mouth shut if I see a problem.”

Having fallen in love with the flat structure Sweden made popular, Vladislava is keen to uphold that methodology in her own leadership style. A self-starter who has shown initiative and bravery to get into the position she now finds herself in, Vladislava leads her team with her fingers firmly on the pulse.

“I’m trying to enable people to do the best job possible. To do that, i’m working with organizational structure of my department, arranging regular reviews of competition, interviews with the customers and other activities enabling Product Managers to make good decisions.

Paying particular attention to the softer skills in business, Vladislava is always looking for self-starters and mature leaders who aren’t afraid to work on their own self-development and embrace the mistakes we all make.

There is Less Space for Us to Express Ourselves

Vladislava’s move to Sweden from Russia earlier in her career was largely driven by her love for the culture – a culture that celebrates expression and freedom of speech regardless of your background.

“I like that there are many companies who are challenging the status quo, and actually trying to actively build this balance between male and female workers in the company.”

But Vladislava also believes that more can be done to strike out biases in the workplace – especially at the highest level – by allowing women more room to express themselves without fear of being viewed negatively.

“If a man takes control and takes up a lot of space people say: ‘Oh, he is a strong leader and has character ’, If you do that as a woman, it’s very likely that you’re going to be called bossy. the same sort of quality can be viewed as a negative trait  in a woman but  positive or acceptable quality in a man. this difference of attitude is where  gender discrimination really shows itself.”