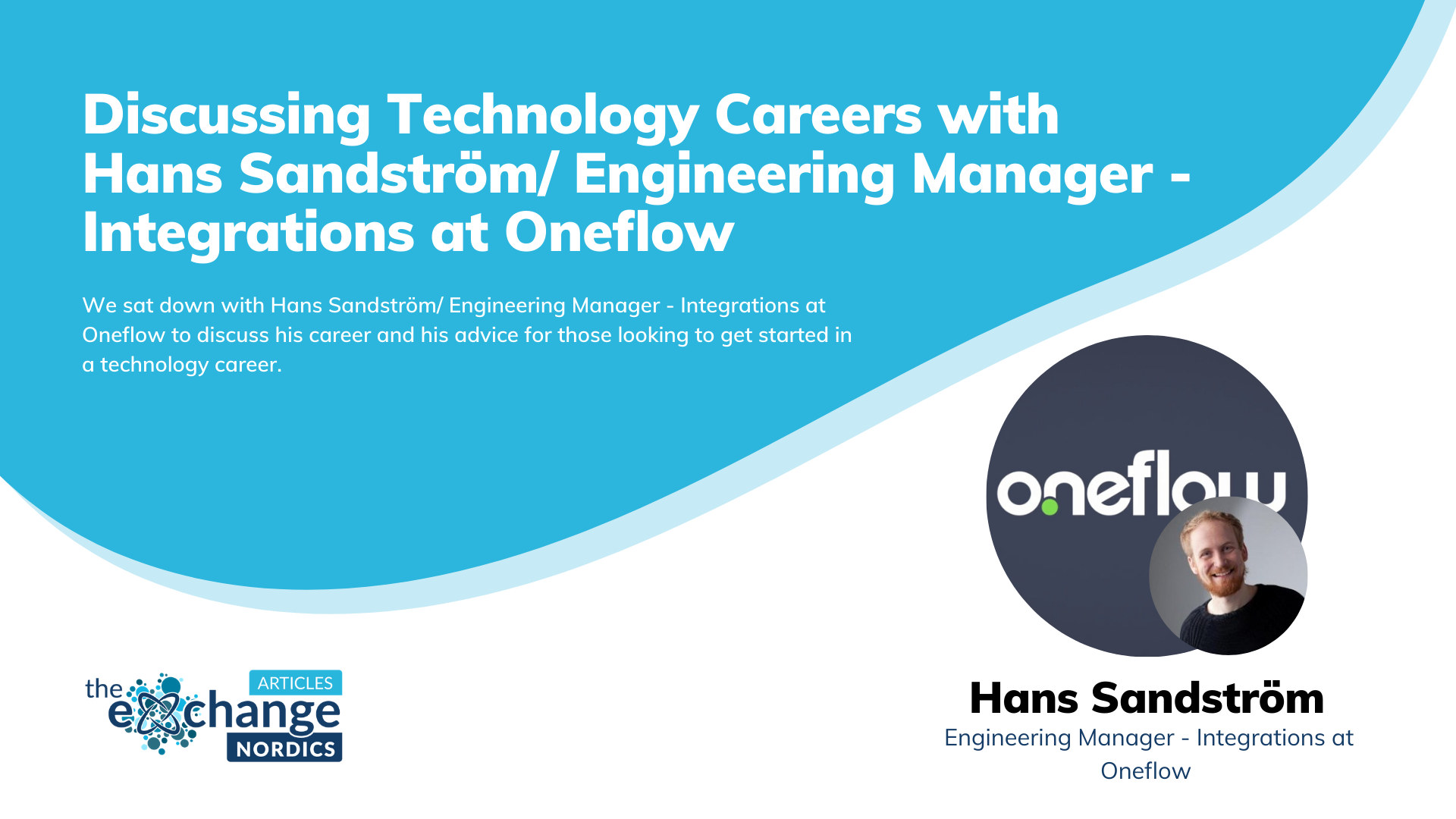 Hans Sandström is the Engineering Manager – Integrations at Oneflow. Starting his career in web development, Han’s moved into embedded development, working with IoT. After shifting into more of a team building focus, Hans set himself up for a career that would lead him to Oneflow.

“I make sure we have the vision and then I gather 10 different people from different backgrounds with different objectives and get them to work towards the same goal. It’s not always easy.”

Currently taking Oneflow on that journey, Hans is working on scalable solutions that can make use of powerful cloud software while still protecting user data. Making all these choices and bringing all these things together make Hans somewhat of an architect.

“Anyone can build a small dollhouse, but it’s really hard to build a skyscraper basically. It’s really tricky both in terms of the computer software system architecture and then in terms of teams, and all these interfaces between people and different teams and different departments and whole sort of bureaucracy that can come with when you scale a company.“

Oneflow wants to revolutionise the way we approach digital contracts. Hans’ team sits at the heart of that and ensures that data flows between systems for both pre-contract and post-contract to provide the customer with a smooth process for contract management.

Right now, Hans and his team are working on adding more and more  integrations while maintaining the smooth process they’ve already developed for their customers.

“When you have an API, it’s about making sure it’s as easy as possible to understand – not just for developers, but for decision makers too.”

We were keen to chat to Hans about his advice for those starting out on their tech journey.

Working primarily in Python, Hans and his team are building agile systems that are changing the way Oneflow’s customers view and understand their contract process.

“It’s an incredibly versatile language and it suits our needs very well.”

The python language is one of the most accessible programming languages available because it has simplified syntax and not complicated, which gives more emphasis on natural language. Due to its ease of learning and usage, python codes can be easily written and executed much faster than other programming languages.

When Guido van Rossum was creating python in the 1980s, he made sure to design it to be a general-purpose language. One of the main reasons for the popularity of python would be its simplicity in syntax so that it could be easily read and understood even by amateur developers also.

Accessibility is key when it comes to new talent breaking into the industry. With new ways to learn languages, like coding bootcamps and popular courses on YouTube, it’s important that employers are always looking at new routes to the latest talent.

When it comes to new developers, Hans believes sticking to a single language for a few years is always a good idea as it allows you to build up the depth of experience that employers look for.

“If we’re looking for an experienced developer, we want to see that you’ve worked with a language for a few years.”

However, the reality of working in an agile business is that you will sometimes need to deviate from your path. Staying open-minded, a switch from one language to the next isn’t as scary as it sounds. Stay curious and ambitious and you should be okay.

Focus on a single language, however, is one of the ways hiring managers like Hans can quickly understand your experience level.

It’s natural, as a new professional in any field or industry, to always strive for the next step, the next challenge, the next role. It’s this ambition that has come to encapsulate a generation and is often the thing that gets us, as a recruitment agency, excited about the future.

However, it is possible to move to fast.

“When you pass your driving test, you don’t know how good you actually are. It’s the same when you come out of Uni, you’re yet to learn how it’s really done.”

Coming out of University, or a period of self-teaching, you’ll have a lot of knowledge. You’ll know how things are done, a certain way. When you join an agile company, a lot can change very quickly. Often, the most valuable thing a new developer can do is stay the course and soak up the experience while maintaining the spirit of curiosity that got you to that position in the first place.

You don’t have to look far to find these open-source communities. GitHub, for one, is a great place to find projects and contribute to them. Not only is this great for your own development, but it also sends positive signals to employers like Hans.

“GitHub or something similar is far more interesting for me than a perfect CV because it proves that you know how to code and that you’re coding for the right reasons, because you’re passionate about it. And not just because it’s a career thing, because I believe it’s really hard to become skilled as a developer, if you’re just in it for the career components.”

If You Stop Having Fun, Something Has Gone Wrong

When it comes to advice for those who are just starting their career, Hans recommends thinking about the long term because often when you try new things in a career, you’ll often have to stick to it.

“So, keep making sure that you stay with fun projects. You take these chances when you’re younger. And when you get older, you’ll probably be more like towards the safe side of things.”