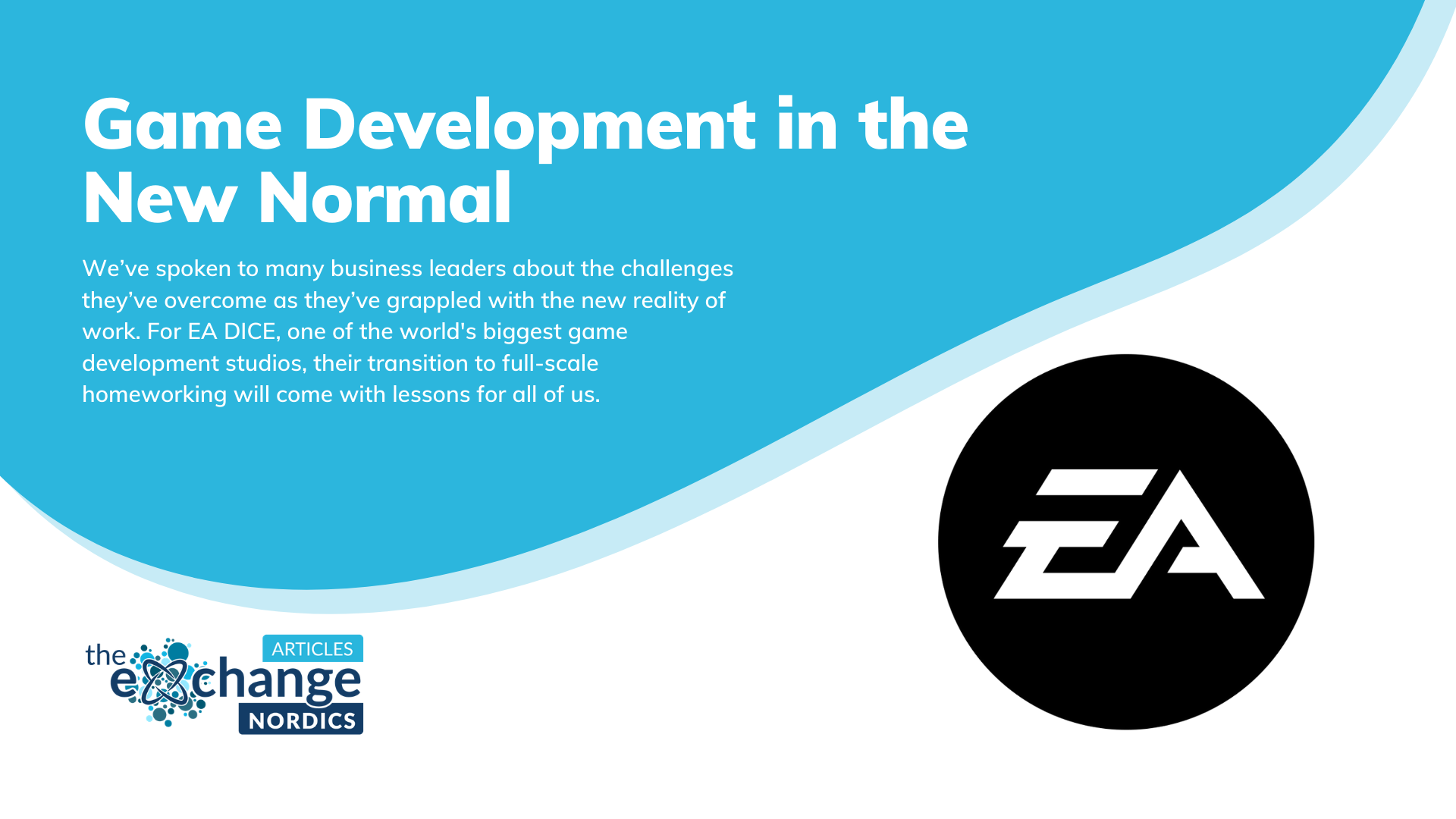 We’ve spoken to many business leaders about the challenges they’ve overcome as they’ve grappled with the new reality of work. For EA DICE, one of the world’s biggest game development studios, their transition to full-scale homeworking will come with lessons for all of us.

We spoke with leaders from EA DICE to discuss their new normal, the challenges they’ve faced in working remote and the future of the studio.

Enabling the Development of AAA Games

Víðir Orri Reynisson is Technical Director at EA DICE. His team’s focus is on the provision and development of a platform for the European Studios of EA to help them build, test and ship their games to release.

“We provide all the infrastructure so everyone else can focus on doing what they do best: making games.”

Managing the platform that enables the development of these games links Víðir and his team quite naturally to how the wider company works and, perhaps more specifically, where they work from.

We Were Communicating A Lot Less Than We Thought

EA and Víðir’s team were already operating with a distributed model as a result of them having different offices across different timezones. In the sense of managing schedules and optimising the workload, the transition for Víðir’s team was smooth.

“A lot of our process, a lot of our culture was already incorporating this notion of not everyone is co-located.”

We’ve spoken to a lot of technology teams from around the world and, as you would expect, the challenges they face are diverse. However, one problem that seems to be a constant across country, industry and seniority is addressing the lack of ‘across-the-desk chat’. The tap on the shoulder, the ‘can you just have a look at this?’. This particular problem has had the most remote-minded leaders scratching their heads.

For Víðir, this problem came with a bit of a realisation that despite their best efforts and their distributed nature as a team, they may well have been more tribal than they first thought.

Adjustments were quick to follow at a team and organisation level which improved the remote working experience but, more importantly, it triggered a mindset adjustment.

“There was a common belief for us as games developers that moving fully remote would be an extremely hard task.”

EA who have been joined by other sizable studios — Rockstar Games, CD Projekt Red, Ubisoft, and Bethesda — have now put policies in place to allow developers to continue their usual day-to-day office activities from the comfort and safety of their own homes as they’ve worked on massive projects such as the upcoming Star Wars Squadrons.

When it comes to testing these games, developers employ ‘Dev Kits’ which usually sit on a desk and connect to the hardware being tested – like a gaming PC, XBOX or Playstation. For Víðir and others around the business, this was one of the concern points.

Thankfully, progress made in overseas offices like the one in Shanghai, made it possible to quickly roll out software solutions that enabled access to dev-kits and hardware at scale – without actually needing to ship dev kits to everyone at their homes. With almost no downtime whatsoever, this development also planted the seed for future conversations around the nature of game development.

“So that’s opening up a lot of interesting questions about like, what does the future hold for us and game development in general?”

One of the first points raised about the future of Víðir’s team was, in fact, an acceleration of something that he and his team had been working towards pre-COVID: a trust-based team culture that used asynchronous communication to support true flexible work.

Key to this was the way that the team tracks performance.

“We track the kind of team velocity at that team level, we’re not really keen on digging into that on the individual level because it’s not something we feel is important and would only ever do this to support someone who is struggling.”

Outside the more specific elements of running a team, Víðir places significant value on balancing this asynchronous communication with synchronous and scheduled socialisation.

“It helps bring people you know from the other offices into your day-to-day and helps cultivate diversity of thought.”

Identifying the Risks and Creating a Culture of Understanding

Jaiook Park is the Lead Development Director for DICE Operations. His responsibilities encompass studio operations, people management, team culture and project management practices. His role, as EA DICE moved to full-scale remote working, was focused on enabling the rest of the studio to work effectively and identify the areas of risk – the first being the practicality of how people work.

“We’re all used to being in the office together. Scrum, in general, tends to focus around these physical standards such as sprint planning around whiteboards and the like. The question was: how can we ensure that we continue to develop effectively in the absence of these items?”

Being a technology company, the minutiae of how systems communicate together and how teams manage productivity off the back of that is naturally very important – but for Jaiook, the human side was just as important as he worked to create a culture of patience and understanding across the business.

“People will have other commitments balancing their personal and work lives and we’re working hard on creating a level of patience and understanding to help people realise the difficulties some of their colleagues are going through.”

When it comes to the development of games, EA have invested significantly in cloud solutions like AWS which made the transition to dedicated home working significantly easier. On top of EA DICE’s existing systems designed to enable home working, they have now also introduced ways to improve the experience for people working from home, spanning from investment in new software to the delivery of ergonomic equipment from the office to people’s homes – but, for Jaiook, it’s about finding a sustainable solution to future-proofing people’s home working setups.

One change, that may seem initially quite subtle, has been the inclusion of a message board system for people to share updates on their day. This has been instrumental in EA DICE’s move away from ‘always on’.

“We’ve been moving to more asynchronous types of communication and have developed a message board system where people can share their status in a way that fits with this asynchronous methodology we’re going for.”

Not only does this help teams connect effectively, but it also helps people, who may now not have many physical boundaries between work time and personal time, find the balance between the two.

“We want to maintain that immediate connection that you have when you actually see somebody, as opposed to being on slack or an email note on what they’re doing for the day.  That doesn’t actually give you a very good idea of where people are with their work and, more importantly, how they are.”