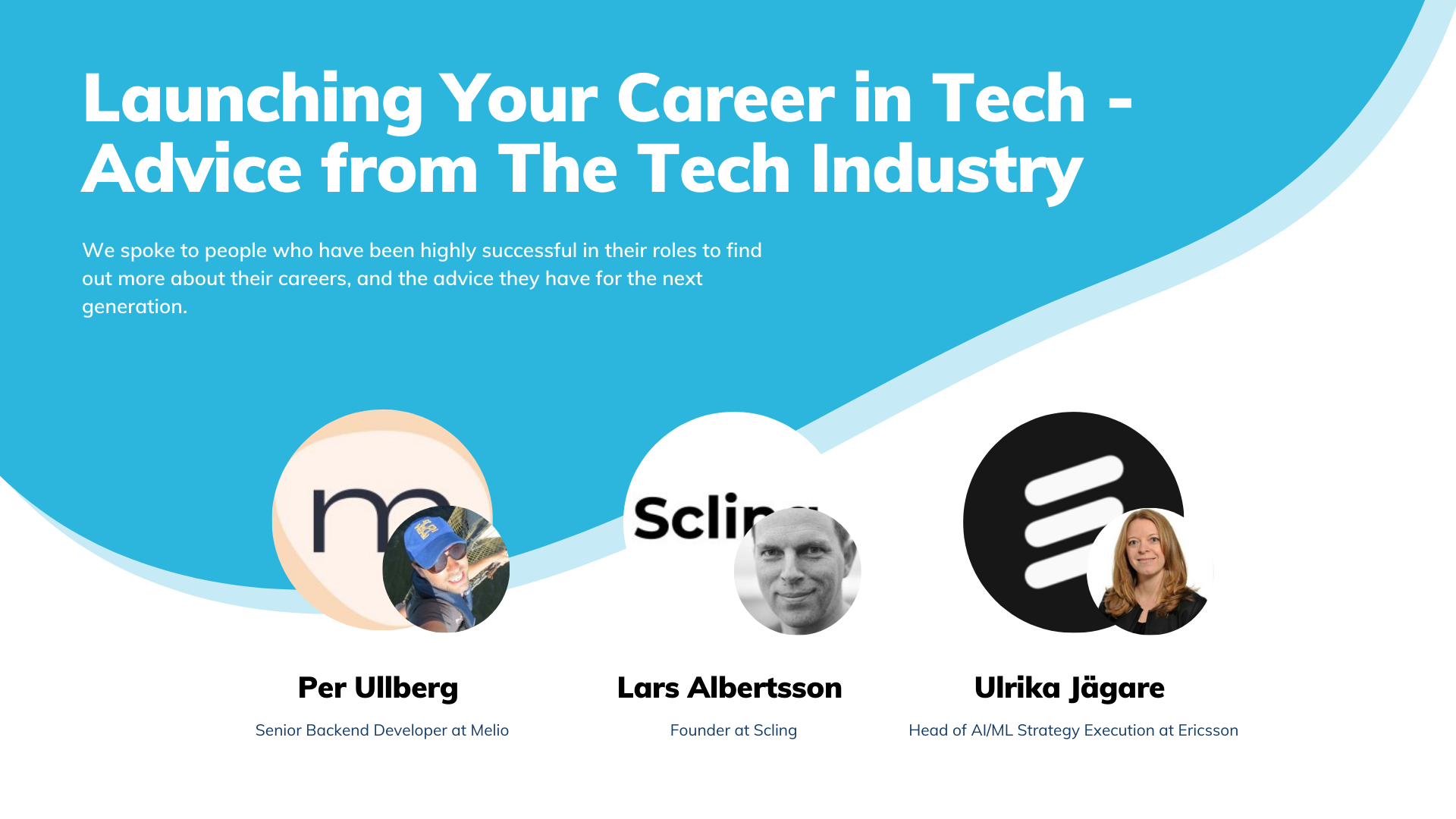 There is a lot to think about for anyone considering a career in technology. With the huge variety of roles available, and the different career paths, it is difficult to know where to start.

An estimated 55.3 million people were employed worldwide in the technology sector in 2020, a number that is expected to grow to 62 million by 2023.

It is a popular field to work in, with plenty of competition. We spoke to people who have been highly successful in their roles to find out more about their careers, and the advice they have for the next generation.

Technology is an enormous field, and there is a diverse range of opportunities available. From app developers to project managers to robotics engineers, there is something for every skill set.

There are also many decisions to be made. From the subject you study to the technology you choose to specialise in, each choice can have a direct effect on your career as a whole. The professionals we spoke to each have very different career paths, and they have shared their invaluable insights with us.

“Choose Your Colleagues Well Rather Than the Company.”

Per Ullberg is a Senior Backend Developer at Melio. This involves leading  scrum teams, evolving existing code bases in a lean, agile environment. This is a role that provides a great amount of utility for people within the company – something that Per particularly enjoys about his career.

“It’s always been my drive to actually deliver stuff to people and see them use it, see them come back with feedback, improve on that feedback.”

Per’s career began with freelancing, and it is a route he recommends for many in the tech field.

“I was attracted to freelancing because it’s honestly so flexible to become a freelancer, once you establish the network you are quite free to move in and out of companies at your own leisure.”

The ability to network and communicate effectively are two key skills that have helped Per to succeed in his career and land more lucrative roles. In fact, for his current role, he did not apply for the job but instead contacted them directly through LinkedIn.

For those starting out in their career, Per is passionate about the value that a good mentor can add in those early roles.

“Don’t look that much at the business. Look at your closest, more senior colleagues. Who will they be? Because when you start your tech journey, the mentor is everything. Choose your colleagues well, rather than the company. Make sure that the closest people to you are good people.”

Per also speaks about the benefit of moving on from roles, and not taking instances of redundancy personally.

“Don’t be afraid to switch jobs if you don’t like it. I got fired at times – don’t be afraid of that either. It has always turned out better. There’s always been a better thing waiting for me. It’s seldom about you, so just move on.”

In the technology sector, it is important to continue to grow, develop and learn from mistakes. Per believes in the value of experimenting, to improve and to recognise errors and understand the value of them.

“You should look at your error. You should adapt. Make something better out of it. But don’t put it in your backpack, don’t let it weigh you down all the time.“

Lars Albertsson is the founder of Scling, a company that builds and operates data platforms for customers. He began his career by studying electrical engineering in Stockholm. He worked for a variety of companies, including Google, Spotify and Schibsted, before starting Scling in 2018. His experiences working for these companies and freelancing led him to understand the limited ways that some companies use data.

“So many companies have so much underutilised data out there. Once you can see all of the potential benefits that it could give, it’s very frustrating to see that most companies are not capable of using them.”

The role has melded technology with company agility and organisation, creating an end product that is completely customisable to the client at hand. The creative business model is based around the idea that the best way for businesses to achieve excellent efficiency is through good technology and good collaboration.

“Businesses know how to buy consultants. They know what that means and they know what they get. It’s predictable. They know how to buy software as a service. That’s also predictable. In terms of helping companies get value from the data, none of these come anywhere near the potential and come anywhere near the efficiency that the Spotifies, Netflixes and Googles of the world are able to do. It is our mission to take clients towards that level of efficiency. And we cannot do that by just selling them a product because then they have to go the last mile themselves.”

Scling was built from a wealth of experience in the technology field. So, what advice does Lars have for those just starting their careers?

“The most important thing is the people that are around you. If they are good people that build you up, that help you and you learn from them, that’s a good place. If they’re not, move. There’s no way to fix the people around you.”

Lars is also a big advocate of lifelong learning. It is through continuing to learn and using that knowledge to notice the technologies which will take off in the future that Lars has become so successful.

“Always continue learning. You don’t need necessarily need to move to a new company as long as you are learning or are able to do new things and develop along the path. Something that has served me very well is to try to look at where the future is heading. If you look at AI, for example, this is just a buzzword, is it not? Well, no. AI is about making computers able to make automated decisions that previously only humans could do. Well, that sounds like a pretty, genuinely useful thing, right? It’s probably not going to go away.”

“Don’t be Afraid to Take on Tech Roles Just Because You’re Not an Engineer.”

Ulrika Jägare is Head of AI/ML Strategy Execution at Ericsson, where she has worked for almost 21 years. Her current role involves supporting the sales organisation to embrace AI, to understand it and sell it. One of the challenges surrounding this is changing preconceived notions towards AI, which she is working on by using virtual reality technology to explain how AI works.

“It’s something that the whole market is struggling with. How do we get people that don’t fully understand AI to trust AI? You shouldn’t have to be an expert to be able to understand what’s going on.”

Ulrika has a Master of Political Science (including Statistics) at Lund University, and she is keen to banish the notion that you have to be an engineer to work in technology. The varying perspectives of people from different backgrounds can bring a wealth of advantages to a company.

“My tech journey would have been easier if I had been an engineer, not from the work I’ve been doing, but maybe from the perception of colleagues and things like that. Of course you need to be interested in Technology, and be prepared to work really hard, but my thinking is that I bring value to a tech company like Ericsson because I’m not an engineer. If 95% in R&D are engineers, they think very similarly. I usually approach problems from another perspective, so I’m usually the person that comes up with the solution they didn’t think of.”

It can be difficult to enter a field where there are preconceived notions about the qualifications and background you should have, when they are different to your own. However, she has found that by basing her leadership on openness, a positive mindset and by always share as much information as possible about what is going on and why, you can inspire people and get commitment to your ambitions even beyond your closest team. That is how you drive real change in a company. A change that matters.

Those who are embarking on their careers should also be aware of holding onto responsibilities for projects for too long, because moving on to new projects brings new important contacts, experiences and knowledge.

“I am very stubborn. Usually, I have a good use of that, because it helps me reach my objective, it takes me over the finish line, I don’t give up. But sometimes I should give up earlier. Something that I wish I had done differently in the beginning of my tech journey is realising that I don’t have to take responsibility for everything I work with until it´s finished. It´s ok to hand over to a colleague and move on to new endeavors.”

Another hugely fulfilling part of Ulrika’s life is writing and publishing books in data science through Wiley. She has written seven books within the “for dummies” series on different aspects of data science, AI/ML and data management, and finds this avenue away from her day-to-day role a satisfying way to share her knowledge in the area.

“It really has added so much value to me. Quite a lot of people have written to me and thanked me for helping them sort what data science is all about. Some readers even say that they have re-designed their entire company setup based on my book “Data Science Strategy for dummies”. That´s amazing! It´s very fulfilling to know that I can share my experience and advise beyond the company I work with. Although my company Ericsson actually encourages employees that are experts in various topics to get published. It strengthens the view of Ericsson.”

Ulrika is currently working on her book “Operating AI”, which will be published as an ordinary Tech book with Wiley, not under the “for dummies” brand. But you can find “Data Science Strategy for dummies” at most online stores that sells books, for example Amazon.