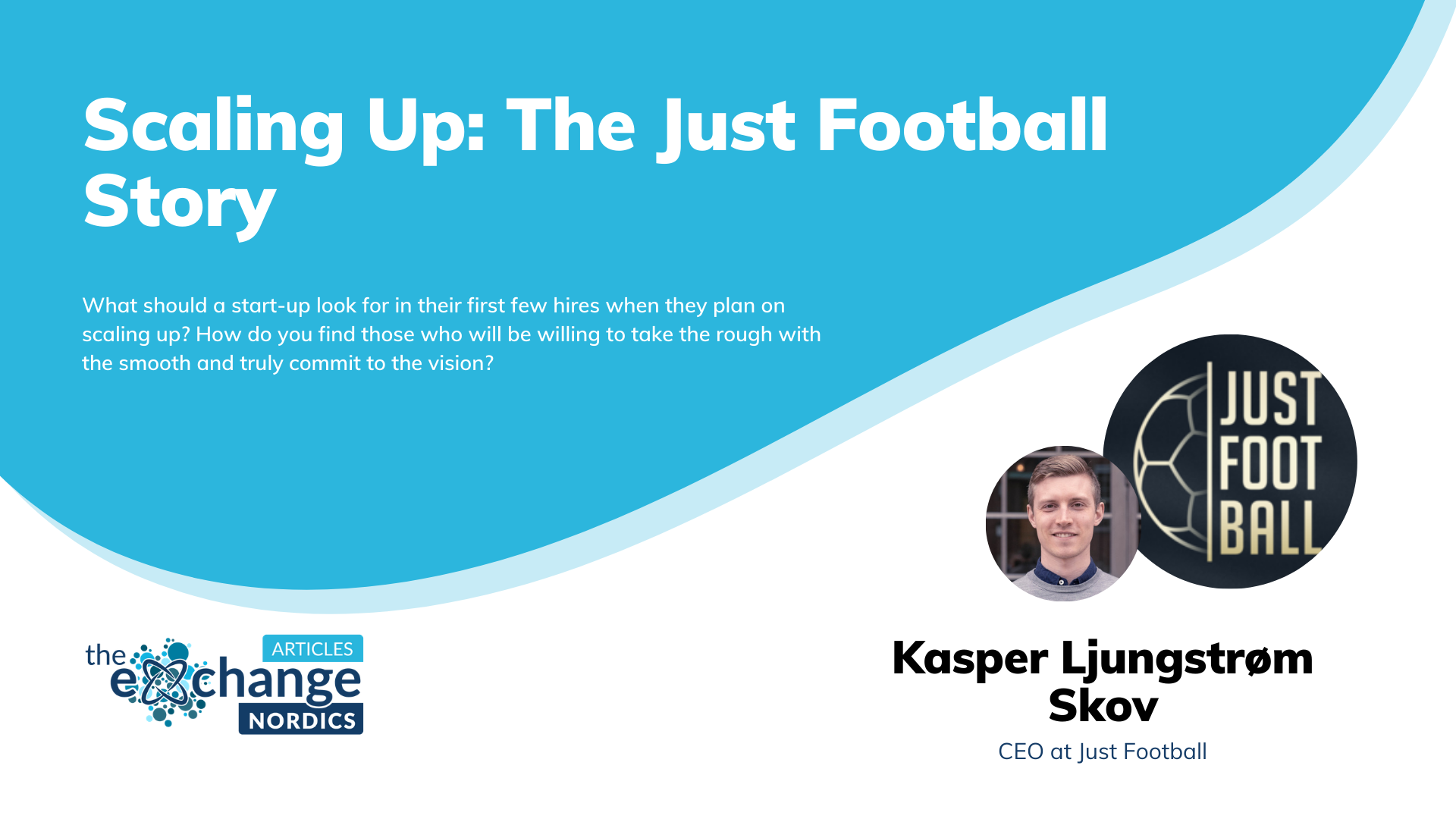 What should a start-up look for in their first few hires when they plan on scaling up? How do you find those who will be willing to take the rough with the smooth and truly commit to the vision?

We sat down with Just Football’s CEO, Kasper Ljungstrøm Skov to discuss the early days of running a start-up, growing the company and making that all-important first few hires.

Educated in interactive design and marketing, Kasper was just 21 years old when he got the chance to move to New York City to work within a digital agency on campaigns for global brands such as Pepsi, Apple and Mac Cosmetics. Before this, however, Kasper was building his portfolio as a freelance designer – and that, was where his heart really lied.

“I’ve always had this urge of wanting to do things my own way.”

Making the decision to move to Sweden, Kasper started a Digital Business Course at Hyper Island. Through a classmate he would meet his Co-Founder and trigger the catalyst for what would later become Just Football

“We saw the problem of sports, and in particular football, dropping behind the curve of technological development. It just didn’t seem to have the same ability to trigger people and keep them coming back as many mobile games targeted a younger audience.”

From this insight, Just Football was formed. How were Kasper and his team going to combine technology with sports and incentivise healthier lifestyles at a time when esports were booming? The answer was an app that would gamify sport by combining players’ real performance on the pitch to a digital football career experience on the phone. Just Football would provide challenges, leaderboards and accolades to those who loved the game of football.

Starting out in a Head of Product role, Kasper and his team were forced to wear several hats to get the company off the ground. Taking his experience of working with massive brands, Kasper was able to quickly set up an agile team structure based around technical integration and agile project management, all while testing the product in real time.

“I was out playing football with different audiences. Five times a week, I would organize football via Facebook and try to play with coaches, try to talk to parents. I was interviewing eight year old kids trying to really figure out and understand where our potential was.”

Using a prototype on his phone, Kasper would test new features every week to understand which one resonated with each audience.

“I remember one kid yelling “It’s like i’m in the Champions League” after seeing all of his stats. That’s when we knew we had something.”

Naturally, this wouldn’t be a start-up story if it didn’t have some semblance of sacrifice. For Kasper and Just Football, the sacrifices were abound with the two founders having to move in with each other to keep the costs down.

“We were bootstrapping everything to keep the expenses down.”

This was all done while Kasper and his fellow Founders were studying towards their respective degrees and holding down jobs that funded their livelihoods. An incredible feat of multi-tasking, Kasper and his team were often working 70 hours a week to juggle the two.

“I’d be doing design work and setting up football matches during lectures. It became a question of what was a better investment of my time. My belief in Just Football was unshakeable”

Finally, after a year and a half of getting by and iterating on the product and business plan, the investment was to pay off – literally. After being accepted into Stockholm School of Economics incubator, the doors opened up for investors who viewed Just Football as a real prospect worth investing in. This was followed by several government grants and monetary awards from competitions. This really allowed the team to take Just Football to the next level.

After starting 2017 with a finished round of investment and outside investment from a professional footballer, Just Football was ready to move away from being a project and towards becoming a real company. Just Football were competing with Spotify, Klarna and King for Swedish talent and are starting to test the concept in larger European countries through influencer campaigns.

Advice for Those Starting Out: Find a Program That Matches the Stage of Your Company

A startup incubator is a collaborative program designed to help new startups succeed. Incubators help entrepreneurs solve some of the problems commonly associated with running a startup by providing workspace, seed funding, mentoring, and setting up essential workflows for the company. The sole purpose of a startup incubator is to help entrepreneurs establish and grow their business.

But not all incubators are the same. Some may have a proven track record of helping their portfolio grow, while others may focus on different things such as commercialisation or finding new partnership opportunities. For Kasper, finding an incubator that matched the stage of Just Football was key.

“If you’re not ready to grow, don’t look for an accelerator that is focused on growth. Find someone who can help you find product-market fit first. If you’re looking for monetization, make sure there are people in the program that can help with monetization or promote commercialization.”

These programs can quickly turn into long term relationships which can provide support for a long time after initial interactions.

Tips for Hiring for your Start-Up

After closing their latest round of funding, Just Football are now competing for top technical talent to expand their AI and AR functions with Kasper leading the way on interviews.

We asked him for a few tips for those who might be looking to make those very important first few hires in a start-up.

Find Your Structure and Outsource When Needed

Although not a tip directly related to hiring, this is an important point in preparing someone to make their first hire as you can’t commit to managing someone else if you don’t have your processes ready.

“I consider my time to be my most valuable asset. So try to find a good structure so you have your things in order to keep track of everything. Don’t be afraid to outsource things such as finances if you don’t think it’s a good investment of your time. Do what you’re good at and that brings the most value to your business.”

Look for People Who Can do it All

In the 1950s, the average age of a company on the S&P 500 index was 60. Today, that number is 20. This means that the most successful corporations are growing three times faster than they have in the past. To succeed at this rate of rapid change, employees and business leaders have had to adapt by adopting growth mindsets, learning new skills, and embracing flexibility.

This has been a governing principle for Kasper and his team at Just Football as they enter a period of rapid growth.

“Most of the people we hired in the past are now doing something different.  It could be someone we recruited as a community manager to start with, who ends up being a designer, or a front end developer who turns into a back end developer. Or now we even have some frontend developers working on machine learning and computer vision because they’re super interested in learning that field. Whatever it is, we make sure we’re finding people with a diverse skillset and the ability to quickly pick up other skills. The ability and hunger to learn new things is key to me when hiring. ”

With professionals who have a broad set of skills, Just Football are well prepared for the next phase of growth.

You Need a Pressure Test at Interview

Working for a start-up can be a bit of a rollercoaster with massive ups followed by deep downs.

“It’s super exciting. And other times you’re struggling. It’s hard. You have no funding. You don’t know if you can pay the bills at the end of the month. I think it’s really key to have people in your team that understands that,and that can still focus on work and propel through those kinds of situations.

Kasper believes wholeheartedly in a transparent approach to hiring that really tests the mettle of the potential hire. Not only will this mean that all the cards are on the table and the candidate will know the full potential of the company, as well as the risks, but it will also mean that you can see how the candidate deals with the pressure that is omnipresent when you’re working in a start-up.

“I laid it all out in front of him, explained the risks and how this is definitely not the safe option. But I also showed him how hard we’ve been working and where we want to go. He took the job the next day, and I knew he was a great fit.”

Kasper, who is in the process of hiring a leadership role for Just Football, believes in offering equity as an option to find those who are truly willing to commit to the volatile nature of a startup.