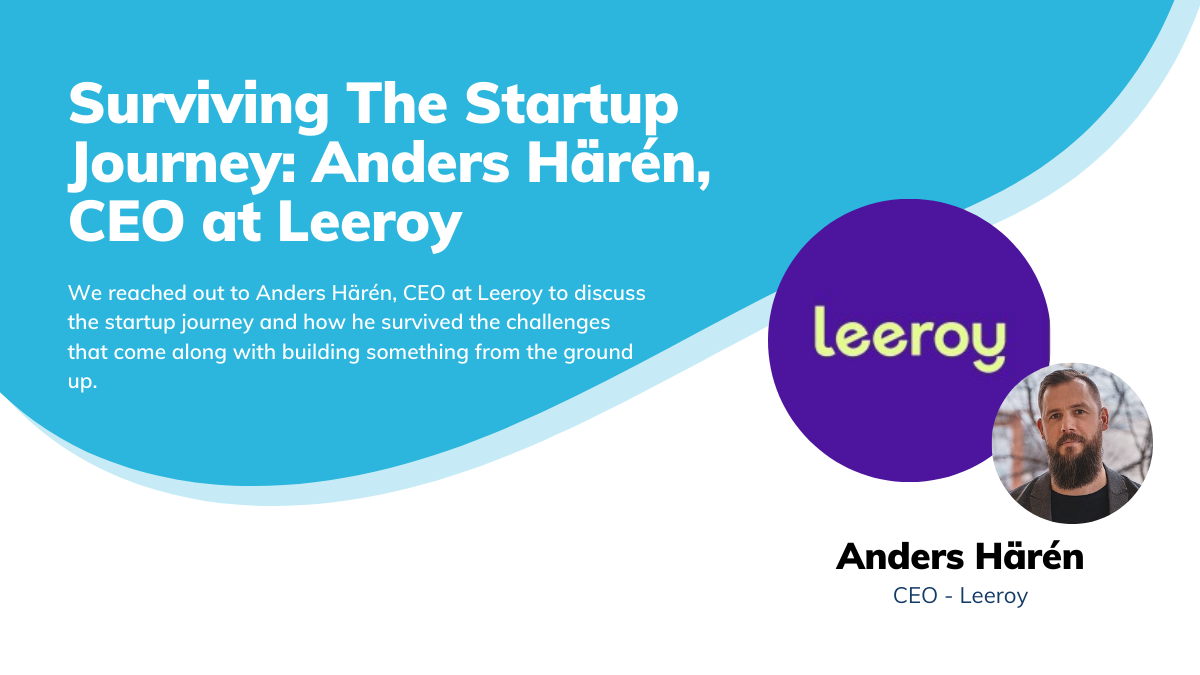 The Startup experience is different for everyone, from the industry you’re specialising in to the amount of funding you receive. But, if there’s one thing that unites all start-ups, it’s the absolute certainty that building something from nothing is incredibly difficult.

We reached out to Anders Härén, CEO at Leeroy to discuss the startup journey and how he survived the challenges that come along with building something from the ground up.

A creative at heart, Anders started coding web pages at the time of the dotcom boom. Amazed at how you could make something out of nothing, coding quickly became his passion and Anders’ decision on what he wanted to do with the next stage of his life became an easy one.

Starting an Engineering degree, Anders got to flex his muscles in a range of different areas. Design UX, 3D modelling, network programming and all the frameworks and languages of the time.

“This was great for my time at University, but it made picking a job hard because I wanted to do it all.”

Returning to his hometown, Anders found a role at a Media company as a web developer for their B2B branch. It focused on business development by combining programming with UX and sales. This role, as opposed to a regular consultancy, allowed Anders to keep working on the full spectrum of his passions in a workplace.

Joining just before the Financial Crisis of 2008, the Media Company Anders joined was primed for a massive restructure. As a cost-cutting measure, many of the departments were combined.

“It was a fun few years, I was jumping from different projects and working closely with customers. But, the downside was that it was hard to deliver quality code that you were proud of because there was always a new project waiting.”

It was about this time that Spotify was starting to ramp up and Anders, a keen reader, was intrigued by the Agile methodologies made famous by the company because he thought they’d be the answer to the Media company’s problems – but his company at the time, didn’t share the same interest.

“I was about to leave when they were looking at starting a web development team for the whole Media group. I took the role and became Director of Development with a tiny team that had no budget. We were basically a guinea pig. Survive the year and then we’ll talk.”

Anders’ role was to go between development and stakeholders in a classic form of backlog refinement. Organising a very small Scrum team, Anders was able to set up a few ground rules they stuck with for years as they grew the team.

“I was very much focused on bringing UX and tech together. I was in the forums where the business and product strategy was happening, but I wasn’t part of shaping it. So classic ‘we set the demands, you deliver the tech.’ And we did well. So we got more funding. So we scaled pretty fast. We were five in the beginning, we ended up all the way up to around 60 people.”

Never ready to settle, Anders continued to monitor the market and read as much as he could. Around the time his team was finding stability, Anders was reading Lean Startup and other Startup literature that covered fail-fast methodologies and this opened his eyes to the blockers within his current company.

“My biggest frustration was that we could drop millions on a project and if it fails, we move onto the next. We never learned, it never hurt to fail.”

Seeking out that frustration, Anders reconnected with a few old friends who were running a startup called Leeroy that had just raised capital.

“They approached me at the right time. They showed me the startup journey and the bag of money before asking me to come up with a product and recruit the team before the money would run out.”

In life, things come at us thick and fast. An old saying: ‘when it rains, it pours’ could definitely be used to describe this period of Anders’ life. As he considered the proposal at Leeroy, his Wife gave birth to twins.

“A rational person might have waited a few more years.”

From Friends to Founders – The Start-Up Phase

With the next stage of his life firmly set in stone, Anders started the process of building Leeroy up from the ground with the 5 Friends and original Founders.

Founding a company is incredibly difficult. It’s a challenging period that can test even the best relationships. For Leeroy, today only 2 of the 6 original friends and founders remain.

“You’re starting a pretty intimate relationship. It’s similar to dating. You go on a few dates, and they ask you to marry them and maybe you buy a house together. It’s one thing to like a person but another thing to start a family with them. So you need that mindset because you’re gonna be stuck with them and you’re going to have to argue quite a lot.”

Anders and his Co-Founders were entering the start-up phase without a product – Anders’ task was to create one off the back of the vision and team.

Leeroy, right now, is a business platform for Restaurants. But it didn’t start life off as that.

When Anders joined they had two platforms: one platform for direct marketing on digital signage screens, and one to mobile phones – with neither of them being particularly great at serving either of their products.

“First, we had to totally rethink our value proposition and secondly, we had to completely restructure the tech. We decided to completely focus on Food and Beverage because Retail wasn’t going anywhere. Everyone has to eat, and restaurants all needed a serious tech upgrade with some of the big players – like Dominos Pizza – leading the way. “

Anders realigned Leeroy’s value proposition. They were now targeting restaurant chains who were excited by the prospect of digital transformation but didn’t have the toolkit to make it a reality.

In 2017, Leeroy was already burning through capital quite quickly after hiring a large tech team to realise the products they needed. A lot of people in the company were getting frustrated because coding hadn’t begun – but that was all part of the plan to create a great product at a great price.

“We waited a long as possible to start writing the code so we did research, talked to customers, did usage tests etc. We wrote the first line of code in May 2017 and launched the whole product in January 2018.”

This approach, which involved focusing on making sure everything was right before starting to code, was one that served Leeroy well as it allowed them to keep costs at a minimum.

“If your product idea is on a whiteboard, you can change things quickly. If it’s in code, it’s not easy to pivot.”

After launching, Leeroy spent the next year scaling and growing to get the social proof they needed to secure more capital. Learning lots about the restaurant industry, the products kept expanding. In retrospect, Anders can see the mistakes he and his team made.

“We should have looked more on buy vs. build but we had a DIY attitude so we built everything ourselves. We could have chosen more Open Source solutions too but at the same time you want to minimize external dependencies and build intellectual property so it’s a tough dance. And at the same time you need to keep scaling so you can have pretty nice numbers to show investors so they keep investing. But scaling by building new stuff while you’re signing and rolling out new customers AND maintaining the product for the customers you have is even trickier.”

For Anders, who is now driving Leeroy’s ambitious expansion, the key to growth and success in commercial settings lies in a focus on values.

“We set our core values from the start and make sure we live them. That keeps us together through the rough patches and through the scaling.”

For Anders there’s a clear distinction that can make a massive difference to your team.

“Who doesn’t want a transparent company? It’s a bit of a cliche. Clarity, on the other hand, is underestimated. It reduces stress and helps you get your work done. The clarity in strategy and structure unlocks freedom because you don’t need to talk about the mission – it’s already there in the strategy and structure.”

What’s Next For Leeroy?

Anders and Leeroy are currently in the scale-up phase where they’re facing new and unique challenges like balancing teams with the old guard and the new blood, working on structures and more.

When asking Anders to reflect on the scale-up phase he replies:

“If I’m supposed to answer what happens after next, you’ll have to call me in a year or so.”

This approach is essential to Anders – always keep learning.