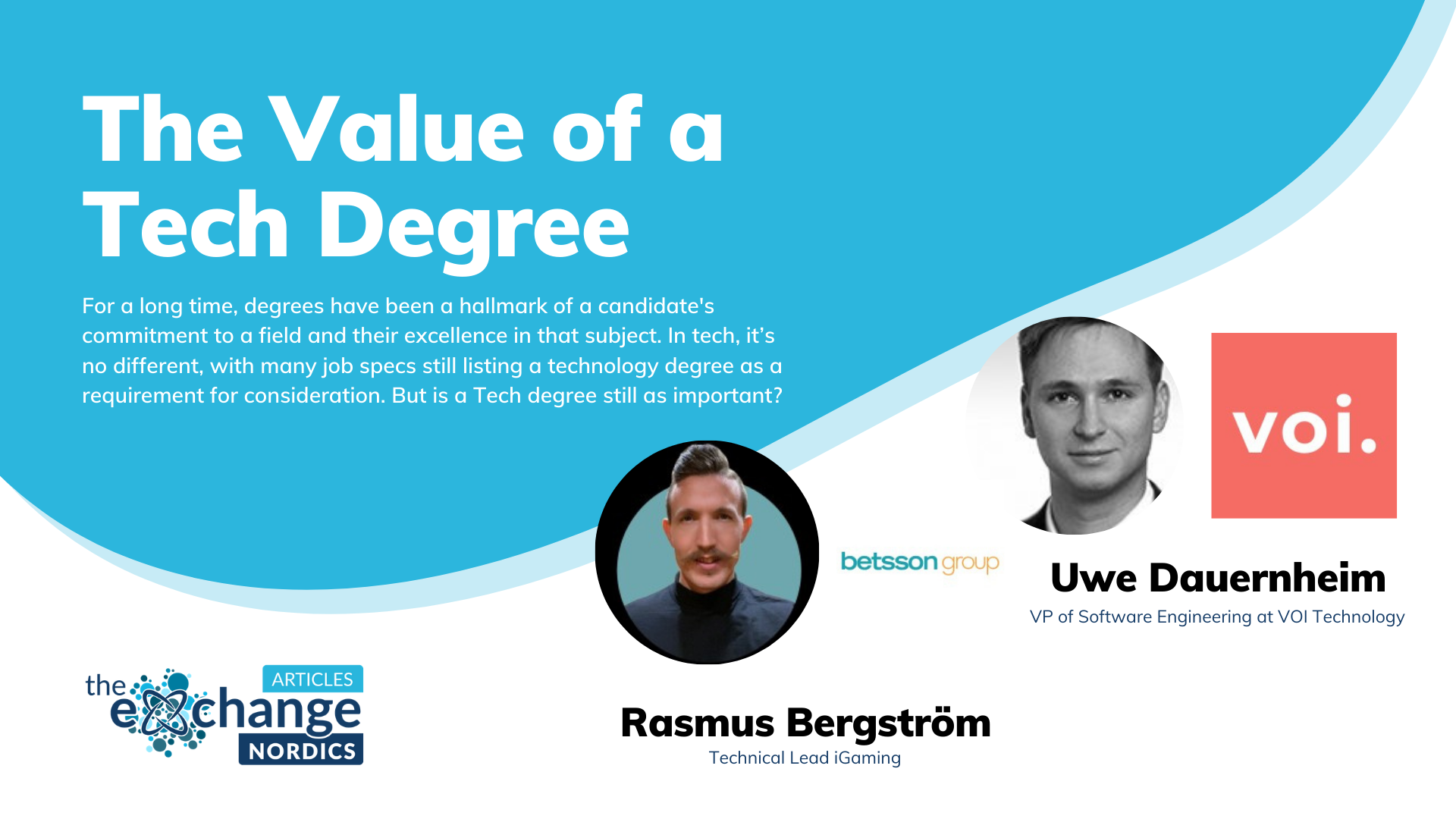 For a long time, degrees have been a hallmark of a candidate’s commitment to a field and their excellence in that subject. In tech, it’s no different, with many job specs still listing a technology degree as a requirement for consideration. But is a Tech degree still as important?

But according to the HackerRank 2020 Developer Skills Report, the dial is moving on education and tech. Their report, which featured over 116,000 developers from 162 countries, revealed that a third of hiring managers have hired a developer who has learned their skills purely from bootcamp software and other sites like YouTube.

We spoke to a few developers and tech leaders on their route into technology, the importance of a tech degree in technical fields, and advice for those who might be looking to break into tech with or without a tech degree.

Uwe is the VP of Software Engineering at Swedish Urban Commuting Company, VOI Technology. Reflecting on his career, Uwe can’t recall an employer who has asked him about his degree.

“I started to think: why is that? In interviews, it’s mostly about giving the right answers and demonstrating your competency – but they never dig deeper. How do you know this information? Was it self taught? Or did you go to university? That information can tell you a lot about a character.”

The value of a technical degree can be somewhat diminished by the fact we never pay as much attention to how we learned something as we do to if we know something.

“You apply a lot of the knowledge you learn without knowing where you knew it from. After things sink in, it just becomes part of your knowledge and intuition.”

Struggling to keep up with the rate of change, curriculums often come under fire for not being relevant enough to real-life experiences. But is changing them that simple? School curriculums are often curated over decades and built around qualifications and examinations. They’re large and cumbersome – a system completely at odds with the technology industry which is always changing.

“The industry is changing at a more rapid pace than maybe in other industries. For many reasons, the hardware, the science, sometimes even physics, like quantum computers, and even new things like machine learning, vision, GPUs, so a lot of things can change now that you wouldn’t even have time to put in a curriculum at the university.”

Startups, often hungry for employees that fit the rest of the team and help them scale, are less likely to factor in degrees into their hiring decisions according to Uwe.

“I could imagine more traditional companies and larger companies asking for degrees as it’s an easy way to get a basic understanding of someone’s competency.”

It’s common practice for employers to ask for portfolios from their candidates. For those in design or similar roles, portfolio creation in university is commonplace and widely accepted in the application process.

Portfolios for technical candidates, on the other hand, are often populated with GitHub projects and online courses as opposed to university projects which are often done in isolation and too far removed from a working environment.

Do You Look at Tech Degrees When You Hire?

Speaking specifically about the recruitment process for engineers and developers at VOI Technology, Uwe prefers to focus more on understanding a candidate’s applied knowledge.

“I don’t look at degrees but I do ask questions that are being taught in universities. It gives me an idea of how quickly they pick things up. Outside of that, I’m asking about previous experiences to understand how they apply their knowledge. We’ve hired people who have come from a self-taught background and those from University and their knowledge are almost indistinguishable.”

For Uwe, one of the most important aspects of the technical interview is understanding a candidate’s more subtle traits like their ambition and teamwork, and EQ (Emotional Intelligence).

“For me, it’s about the softer skills. Do they have drive? Aptitude for development? And then do they fit with the rest of the team?”

With VOI working with technology on the bleeding edge of development, Uwe sometimes has no choice but to look for candidates who come from a University setting.

“Sometimes we work with tech that comes straight out of research. If we want to use that we must pick someone who comes from University.”

With over 10 years of development experience and, more recently, as a technical lead – Rasmus is an expert when it comes to the setup and enablement of development teams. With a Master’s Degree in Computer Science from Uppsala University, Rasmus believes that a degree alone isn’t enough to get you the career you want.

“if I look at myself, I have a degree in computer science, but I still believe that most of what I’ve learned, I’ve learned throughout the years of working. I can’t really pinpoint anything that I’m working on today, that can be directly attributed to the education that I received at university. Because it’s on such an abstract level.”

Rasmus, who looks for strong personalities that fit the rest of the team while assessing the applied knowledge of a candidate at an interview, believes the slow pace that education moves at – and the vast array of different ‘personalities’ in education – are often at odds with the problem-solving mindset of programming.

“I’ve had lectures about object-orientated programming from professors reading photocopies from textbooks. I’ve also had professors describing binary search by tearing up phone books, both equally worthy points in my education on paper, but miles apart in the way you convey knowledge. We look for programmers who are motivated by solving problems, the classroom setting isn’t always the best place for that.”

Outside of demonstrating a candidate’s ability to move from project to project and their commitment to said project, a degree is rather limited in how much it tells you about a candidate. For Rasmus, it’s a good first step of vetting.

“A degree is a good first step of understanding if a candidate has a solid foundation and can move from point A to point B. You will see through this and understand how they think by actively coding together or giving them some sort of code assignment to show how they solve basic problems.

Hire for Personality, Train for Skill

With hiring responsibilities, Rasmus has a core doctrine that he follows when it comes to finding the right candidate that, more often than not, doesn’t involve the education of the candidate.

“Hire for personality, train for skill. That’s my methodology, you have to trust your gut because regardless of what formal education someone has, as a developer they’ll be facing problems that school hasn’t taught them. The gut feeling you get around someone’s attitude and personality will probably serve you better in choosing the right candidate than any diploma ever will”

Build Something, Get Your Hands Dirty

If you’re looking to make a career in technology and you don’t have a tech degree, Rasmus recommends rolling your sleeves up and building something that demonstrates your understanding, knowledge, and commitment.

“Get your hands dirty, and try something, clone a couple of repositories from GitHub that you find interesting. Try to tweak and modify them, and showcase that. Build a personal project, base it off something else, but showcase that you understand the reasoning behind the architecture and technology in the application. That’s the tip I can give, there are so much information and so many amazing projects out there today, try some of it out and you’ll come out the other side with some applied knowledge, something I’m willing to pay for.”