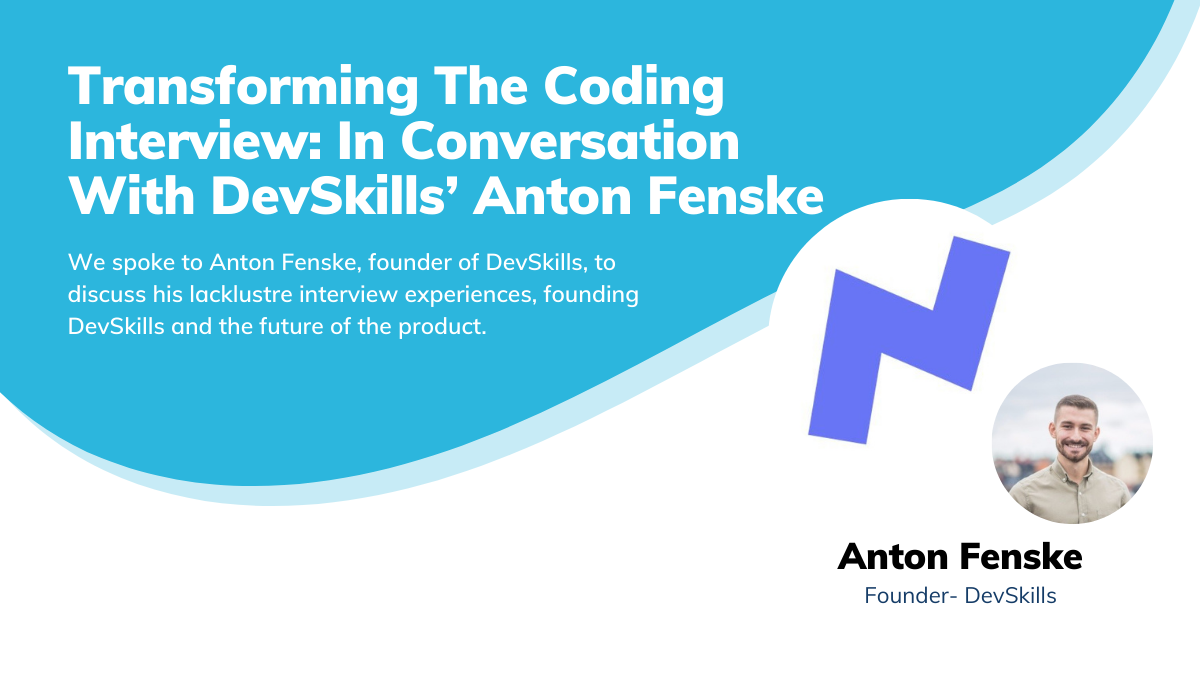 Any Google search or discussion with software engineers about the developer hiring process quickly surfaces a myriad of opinions on how coding interview tests are used in the recruiting process. You’ll find lengthy debates on Twitter or Reddit discussing the technical test process, with some ‘debates’ quickly turning into full-frontal assaults on poor experiences and wasted time.

As a recruitment agency, it’s a debate we come up against a lot.

From lack of feedback to lengthy processes – we’ve had our fair share of candidates leave a process because of bad testing experiences.

But, through adversity comes innovation. And through innovation comes DevSkills – a start-up looking to flip the coding skills test reputation on its head by providing easy, concise and intuitive coding skills tests that leave both parties with something to learn from regardless of the outcome.

We spoke to Anton Fenske, founder of DevSkills, to discuss his lacklustre interview experiences, founding DevSkills and the future of the product.

The Trouble With Coding Interviews

Born and raised in his native Russia, Anton has been a software engineer his entire career. After relocating to Sweden for work, Anton took a position at Klarna – where his interview experience would later shape DevSkills.

“The Interview was quite hectic. I was interviewed at two teams. Effectively this meant I had twice as many technical interviews as I was supposed too. And they were quite intense.”

Moreover, each interview had a different focus. While one was very much algorithm heavy, the other didn’t ask for any code.

Fast-forward a few successful years and Anton is starting to run his own interviews. Around this time, Klarna was starting to put in centralised processes for technical interviews that required tremendous amounts of resources to implement and make uniform across the company. It’s here that Anton discovered his first challenge – good coding skills tests are expensive and require lots of coordination, these are luxuries not many companies can afford.

Still at Klarna, Anton would come across further challenges in the technical interview process.

“Interviewing technical candidates involves several stages. Say, for example, you ask your candidate to complete a task and they do it. If they pass, they get another task which is completely different from the last. Results are discarded and there is a massive disconnect in the stages making it hard to build a process on top of results.”

Creating an inordinate amount of waste for both the candidate and the employer, these non-propagating skills tests, more often than not, lead to one of the major complaints that candidates have: lack of feedback.

With no tangible results gathered throughout the process, feedback becomes hard to collate. Of course, the candidate has already devoted hours to the tests and won’t be happy when their efforts come without so much as a modicum of feedback.

With these three problems in mind, Anton would start to formulate ideas. Ideas that would later grow into

Previously, Anton has tried his hand at two ventures that didn’t quite make it off the ground. His first was a clone of a popular app which didn’t get the traffic it needed. His second, a Vegan food finder created after winning the Hack For Sweden Hackathon together with his friends, was more successful. It attracted a couple of dozen users – but stalled later on down the line due to a lack of inner drive.

“None of us were vegans. So we didn’t “live” the product we were building..”

There’s a lesson here for anyone who has an idea for a company – do what you’re passionate about.

Still working at Klarna as an Engineering Manager at the time, Anton, fuelled by the interviewing challenges he was facing at Klarna, was nurturing the idea of DevSkills in his head.

“I started asking around, talking to people from companies of different sizes about their processes. And they only confirmed my assumptions. So I started with a very simple MVP that was essentially a project deployed on GitLab.”

After building this very simple interview challenge, Anton set about sampling it with small startups – to great effect. Hosted on GitLab at the time,  the startups Anton trialled it wanted more.

From this, Anton was able to win more conversations with decision-makers in technology companies. Now validated, Anton was ready to take DevSkills to the next level.

Going from strength to strength in late 2019, DevSkills was growing quite quickly. That continued up until the end of January this year – then we all know what happened.

“Everyone stopped hiring. I thought: ‘it can’t die like this.’ It was terrible timing.”

Still working at Klarna, Anton came to a crossroads – does he keep working as an engineering manager and continue down the traditional path despite his passion dragging him in the other direction?

“I recorded the conversations I was having with people who were using the early prototypes of DevSkills. I listened back one day and I realised how excited I sounded. This person had a problem and I had the solution.”

After a vacation over the summer, and a previous client of his coming back to him with more interviews for Anton to work on, Anton decided he was going to leave Klarna to fully commit to DevSkills.

As the tech industry recovered from the COVID-19 damages, Anton was able to go back to the growth levels of mid-2019.

Making the Technical Test Valuable for the Candidate

Right now, an employer can evaluate candidates across three profiles: backend, frontend and fullstack. They can also evaluate over multiple difficulty levels: junior, mid-level and senior.

The main point here is that each challenge revolves around software engineering foundations. Regardless of language and framework knowledge, these challenges should evaluate everyone thoroughly.

“For example, if we talk about a backend challenge, it makes sure that the candidate can build a service that’s fast and doesn’t lose data. That’s a language-agnostic concept.”

In addition, the challenges are hosted on GitHub, so acceptance criteria can be customised to whatever the employer needs – i.e. the test has to be done in Java.

At the very core of this product, however, is the single-minded focus on providing value to both sides of the interviewing story.

In an interview process for a single vacancy, 9 out of 10 applicants fail. There is so much waste in that process for everyone. For Candidates, DevSkills saves test results – so when you apply for a new position, and they use DevSkills, previous results are loaded automatically.

In addition, the Evaluation Rubric that the platform provides to help the interviewers serves a double purpose. Not only does it help the company create standardised assessment criteria, but it also gives the company something to share with the candidate.

“This is a quick way to show the candidate where they need to focus on next time.”

With the product currently in early access, there are plenty of developments lined up. The Future, for DevSkills, looks bright.

“Thanks to my customers, I keep receiving continuous feedback. This helps me evolve the product in the right direction.”